Vagrancy Among the Shadows of Love 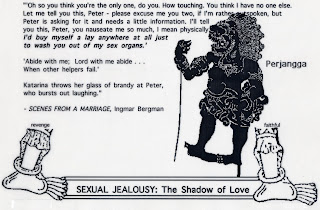 The Trial of Julius and Ethel Rosenberg 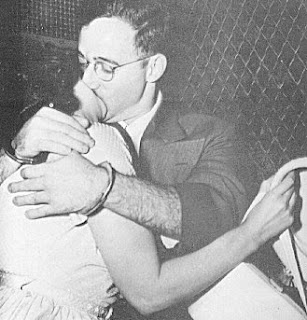 The virtual world of the puppet theater recently became notorious with production of a cold war crime of espionage and execution. Puppeteer Vit Horejs of the Czechoslovak-American Marionette Theater staged "The very sad Story of Ethel and Julius Rosenberg…" about the couple who were convicted of passing atomic secrets to the Russians during World War II. 1 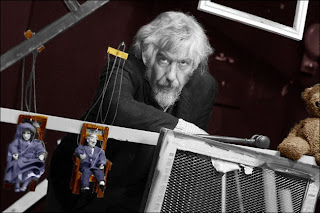 Horejs' conversion of real life drama into a puppet theater reminded me that I, too, once played the dalang (puppeteer) when I documented participants acting out the ways in which they coped with their intense experience of sexual jealousy in my interactive performance "Coping with Sexual Jealousy "(1984). I adapted their responses into the framework of an Indonesian "wayang" (shadow) play to create a computer-assisted interactive installation entitled "SEXUAL JEALOUSY: The Shadow of Love"(1993). 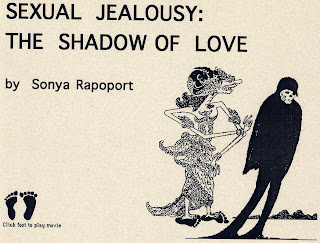 In a Hypercard computer program I combined imagery from Jungian mythology and Aubrey Beardsley prints with clips of incidents of sexual jealousy from TV soap operas. The presentation was accompanied by gamelan inspired music composed by Michael McNabb. Participants were able to investigate the sources of their jealousy, and their methods of coping with their feelings by answering a series of questions at the computer in the interactive program. The "shadow" in the title refers to the observation by Psychiatrist Dr. Ayala Pines, consultant for the art project, that jealousy reflects or is the shadow of the initial reason for the chemical attraction between people. 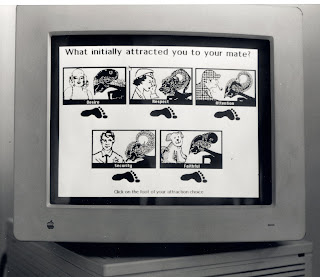 In "SEXUAL JEALOUSY: The Shadow of Love" I selected shadow puppets of Javanese Majapahit Empire heroes that related to the attraction icons of desire, respect, attention, security and faithfulness. The puppets are juxtaposed with their humorous American counterparts.

Morton Sobell's recent confession prompted me to reconceptualize Vit Horejs' puppet characters as virtual Indonesian shadow puppets reminiscent of those I used in "SEXUAL JEALOUSY: The Shadow of Love". In this piece I metaphorically use the computer screen as a scrim upon which my characters cast their shadows of ambivalent love. 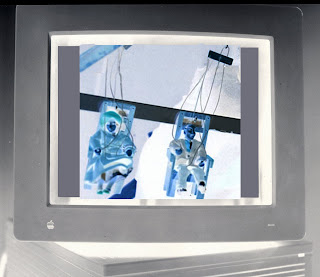 I have re-appropriated the set of categories from my earlier artwork; "Desire", "Respect", "Attention", "Security", and "Faithful" and their respective shadow puppet figures in order to arrange the players, Julius and Ethel Rosenberg; their sons Michael and Robert; Morton Sobell; and Ethel's brother, David Greenglass, according to their ambivalent love attributes:

DESIRE
Julius' desire was to serve Communism and the Soviet Union. His love was reversed against his wife, Ethel, and their two sons when he would not reveal any of his co-conspirator's names.

RESPECT
Morton Sobell's silence about his espionage activities showed his respect for Julius. Then, in his confession, after fifty-seven years, he reversed this love by betraying that he and Julius had indeed been spies.

ATTENTION
Michael and Robert Meeropol, sons of Julius and Ethel Rosenberg were deprived of parental attention when neither parent would cooperate with the prosecution. They were ten and six at the time of their parents' execution. Although betrayed, the sons have consistently supported their parents by repressing their anti-love ambivalence.

SECURITY
David Greenglass, Ethel's brother who at first exonerated his sister from any involvement in the case, later reversed this love with false testimony made by his wife, Ruth, that convicted Ethel. This move secured his own wife's freedom and her love for him.

FAITHFUL
Ethel, faithful to her husband, chose the stoical path in balancing blind loyalty to him with accusations from her brother. She made no compromise that would have allowed her to live and be a mother to her two young sons. 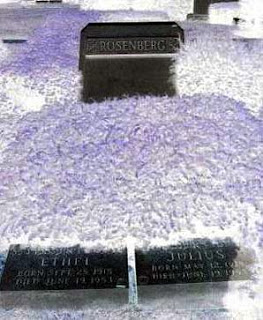 Their last words in betrayal to their sons were: "Always remember that we were innocent and could not wrong our conscience." 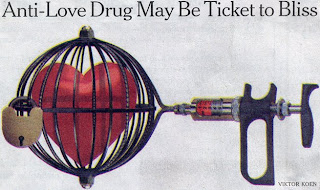 1. To briefly summarize the Rosenberg's story, Julius and Ethel Rosenberg were American Communists who were found guilty of conspiracy to commit espionage, in particular, to pass secrets about the Atomic Bomb to the Soviet Union. They were subsequently executed. Morton Sobell, an American engineer, was also a former spy for the Soviet Union. He was found guilty of spying for the Soviets and sentenced to 30 years in prison. Sobell was released in 1969. He had claimed to be innocent for over 50 years, but on September 11, 2008, in an interview with the New York Times, he admitted to spying for the Soviets, implicating Julius Rosenberg as well. His confession exonerated Ethel Rosenberg's role in the affair.
Posted by Sonya Rapoport's Art Blog at 15:59 7 comments: