SHOE-FIELD: Our Fate is on Our Feet 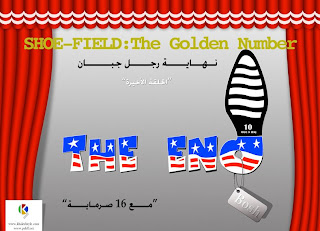 "The conception, execution and function of the art of any cultural system can be considered to be a subsystem, equally integral to the growth of that culture."
— DorothyWashburn

Here is my reflection on the difference in cultural attitudes about shoes between the American culture and the Iraqi culture. In this entry, I have juxtaposed images from my earlier work, with recent images culled from the headlines in the wake of Muntadhar al-Zeidi's shoe-attack on U.S. President Bush. It is my intention to allow the compared images, and the formal and conceptual connections between them, to speak for themselves. 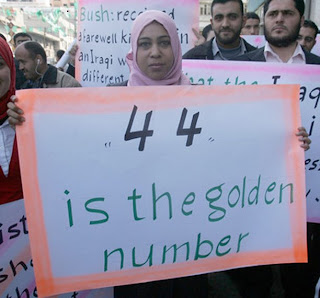 During my collaboration (1977-79) with archeologist Dorothy Washburn on the study of Native American pottery designs circa 1000 CE, I came upon an image of a ceramic foot effigy. It was wearing a sandal style of Mexican origin, unique in its southwestern burial. 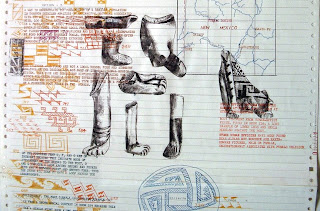 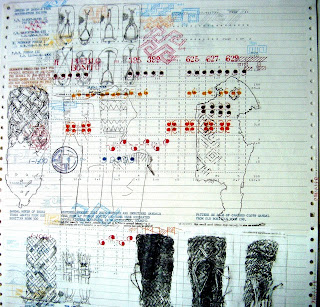 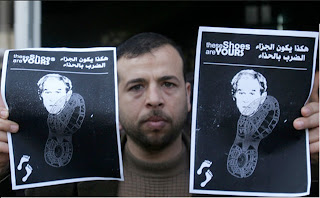 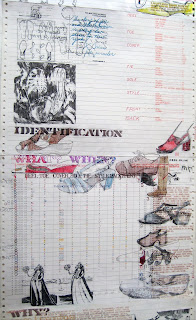 Hanging nearby in the store window was a computer analysis of 44 pairs of my shoes, with hand drawn illustrations. This artwork appeared on similar continuous computer forms as the above-discussed sandal images. The 44 pairs of shoes themselves were displayed on shoe racks. 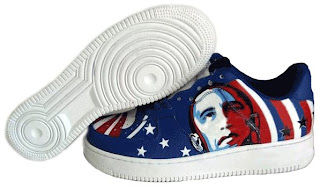 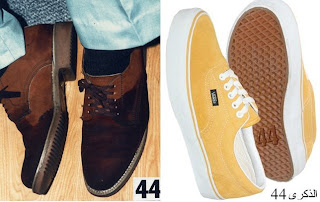 The participants each received a number according to the order of their entry into the computer store. 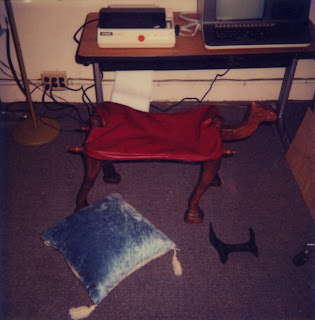 The participants then put their best foot forward ready to engage in an unusual art event. Taking turns, each participant sat on a camel-like chair and selected either a velvet pillow, a cobbler's shoe form, or a plywood board upon which to pose their shoed foot for a Polaroid snapshot. Then each person went to the computer to answer the shoe questions. 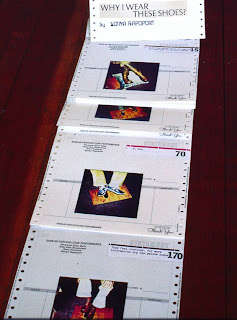 I compiled into book format the participants' photos and their verbal statements (reasons why they were wearing those shoes that evening). 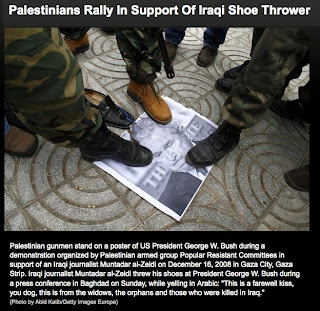 By quantifying the foot position, the chosen footrest and the shoe answers, I calculated the person's shoe “charge” value. This "charge" represented the degree of difference between that individual's “shoe-psyche” and the average “shoe-psyche” of the whole group. 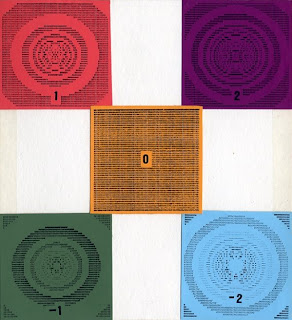 I used each participant's "charge number" and the number corresponding to their entry into the computer store, to execute the Electric Field Theory program that generated the Shoe-Field Plot. 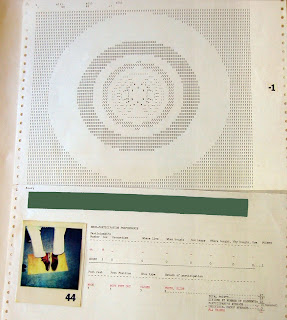 Shoe participant #44 was calculated as having charge "–1". The minus number is indicated on the diagram by the empty center of his non-interactive shoe-psyche plot. Shoe wearer
#44 had not answered any shoe questions. This negative response was counter-balanced by other popular characteristics, i.e. closed-laced shoes and extension of both feet on the plywood board. 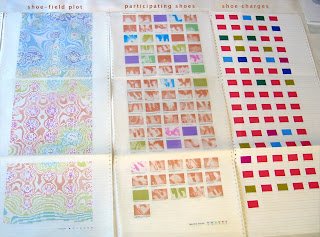 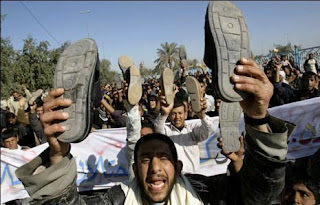 In another incarnation of my shoe works (1988), Shoe-Field, was programmed to be viewed on a personal computer. Participants selected a shoe they would like to interact with from the previously documented shoes. 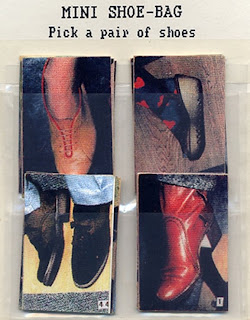 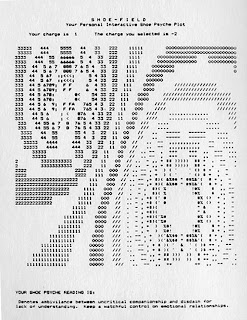 [The text above says, "YOUR SHOE PSYCHE READING IS: Denotes ambivalence between uncritical companionship and disdain for lack of understanding. Keep a watchful control on emotional relationships."]

I documented the personal computer program into an interactive electronic book format. I titled it "YOUR FATE IS ON YOUR FEET". The participants answered questions on the computer about their own shoes and then selected a pair of shoes with which they would like to interact. The printer scrolled out a plot of the interaction that changed the configuration and a personalized "shoe-psyche" reading. 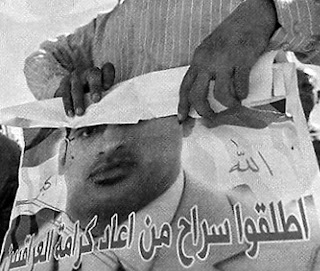 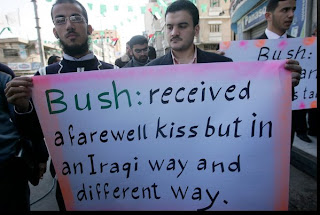 1. "With 16 severances: Bush and the shoes 2." The pun is that the Arabic word for severances shares a root with a synonym for shoes. (Adam)
Posted by Sonya Rapoport's Art Blog at 12:04 2 comments: